Yesterday after chemo, I officially had no use for the PICC line and it was pulled from my arm. It didn’t hurt, actually, it felt like a long piece of wet spaghetti slide out from under my skin. Within seconds I was free. Free from the tubes, the daily saline and heparin flushes, the sickening smell of alcohol wipes. My arm could just be my arm and a shower no longer had to involve a sandwich bag and medical tape.

After work today I was fortunate to have one of those crystal moments of clarity where nothing serious mattered. There was no fear, no countdowns until something unpleasant ends, and thankfully no overwhelming nausea or exhaustion. I mean, all of those things exist steadily in my life, sure, but they were out of my head at least momentarily because yesterday’s PICC pull was symbolic. It was freedom.

With my new found “freedom”, I stopped home briefly, threw on a bathing suit and charged to the beach. The 80 plus degree weather at 6pm was certainly a gift as I was determined to get in the water. The waves were huge and crashed around me. The water was chilly but not biting, typical Atlantic in August. I eventually just sat down where the waves calmed and met the sand and let the water wash over me. I soaked in the smell of the ocean, let drifting seaweed cover my lap, and watched the sea gulls scavenge.

To put it not-so eloquently- I was happier than a pig in shit.

(This also resulted in about 3 lbs of sand in my bathing suit bottom when I got home soooo, souvenier?)

Now you may be asking yourselves, Jessica- why are you going to such great lengths to describe an incredibly average evening at the beach? Well friends, because I was denied a true summer. The powers that be filled this summer with hospitals and limitations. In short, more days than not were a total suckfest. I say this not necessarily to dwell on the nightmare that was but to highlight a single evening that brought pure, natural joy.

Tomorrow or the next day I’ll worry again. I’ll drag my feet to the hospital on Monday to add to the collection of scars for another port placement. I’ll begrudgingly sit through another chemo infusion on Thursday. I’ll take things for granted. I’ll continue to yell expletives through closed windows on the highway at oblivious fellow motorists… We’re only human right?

But for tonight tonight, I was cut a break. Nothing in the world stopped me digging my swollen ass feet into the sand, cracking the binding of a new book, and drowning out the world as the waves collided. 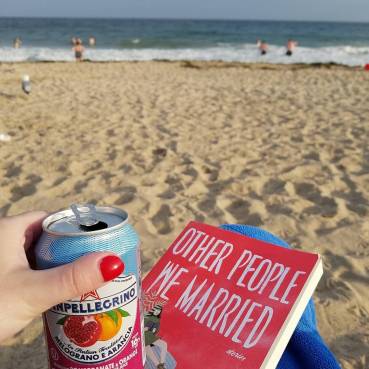 Thank you universe for this taste of summer and utter peace.

I dig my toes into the sand. The ocean looks like a thousand diamonds strewn across a blue blanket. I lean against the wind, pretend that I am weightless and in this moment I am happy