First of all happy almost Independence Day party people. I hope there is abundant BBQ, fireworks, and minimal fits of rage over finding parking in your near future.

Okay, now that you’re all jacked up on the thought of pasta salad and 500 pictures of barely visible fireworks on Facebook- I should probably get the meat of this update.

After returning home from visit #2938409234 to the hospital for my last blood infection I was feeling grateful to be in my own space (and still am) but the week proved to be more difficult than I had imagined. When I left the hospital I thought “oh give myself antibiotics for eight more days? That’s nothing!”

The process of administering these drugs into my port was easy to do, but it tacked on couple extra minutes in the morning and at night. I guess it just became a little thorn in my side because the process of setting up and unhooking TPN infusions is more involved so adding anything else is just annoying. Especially so when it is imperative that you use a new alcohol swab for 30 seconds between every step in the process. BUT avoiding infection is paramount so it helps no one to cut corners when sterilizing.

(FUN FACT: To anyone that has to do TPN or home infusions themselves, a fun trick that I was taught to know that you’ve swabbed enough is to hum the jeopardy song twice.)

Over time, not only did I feel run down but the antibiotics wrecked havoc on me. I experienced tremendous muscle aches, especially in my lower back which made it nearly impossible to get comfortable anywhere, even in bed (this is actually a listed side effect of Daptomycin).

Nausea, ooph. Despite my best efforts to control it with Zofran and Phenergan, I experienced waves of nausea and would vomit about 1-3 times a day. I need not go into more detail about what it did to my tummy so we’ll just say “not pleasant” and leave it there. Unfortunately, it virtually wiped out most of the progress I had made with eating. I still try but I often can’t get more than two bites down before they decide to come back up. My doctor’s (hopeful) goal is to get me off of TPN in the next 3 weeks or so. I feel like I’m starting at square one with eating but I am determined to be able to eat enough calories to no longer have to rely on TPN for nutrition and weight gain.

Beyond the expected side effects my abdomen has felt quite distended which is never comfortable. I’d normally jump to being nervous about another obstruction but despite being distended my belly is soft, I’m passing gas, and have “good bowel sounds” (noise in all four quadrants). So that’s promising. I can only guess that being off of chemo for two weeks has perhaps created some fluid or something pressing against my organs. I don’t know I’m not a doctor.

All I know is that I can’t escape my own body and the discomfort and fear that comes with it. Ask anyone with cancer and they will tell you that anything in the body that feels “just off” without explanation brings about a tremendous amount of stress.

Everything considered, I’ve felt pretty down this week. I have; however, done a better job of reaching out to some friends, family, and Cory to talk and let it out. I have a tendency to sit stoically alone with my thoughts until they bubble over. I found a lot of comfort this week and that has definitely helped to pick me back up and dust me off. Even Dr. Robison and I had a life talk and cried together during my last visit. (SIDENOTE FOR ANYONE LOOKING FOR THE RIGHT ONCOLOGIST: Find a human being that treats you like a human being and asks about your emotional wellbeing unprovoked. It goes a LONG way)

Heaven knows I need to be in a strong headspace because chemo started again yesterday. A funfilled SIX hour infusion. Normally Carboplatin and Taxol wouldn’t take that long but because I’ve had platinum based chemo in the past “your body remembers” and there is a greater likelihood of having an allergic reaction. Because of that they dripped the Carbo alone over a three hour span. Poor Cory. We ended up missing his annual work pool party because we didn’t expect the infusion to last that long. As always, he was great and stayed with me without complaint.

The next two weeks of chemo will be a breeze in comparison. Just taxol so I should be in and out of there in about 2-2 1/2 hours. Cake.

I really don’t want to end on any more Debbie Downer notes. I think it’s important to be honest when things are not okay and recently, they haven’t been great. It’s also important to highlight the moments when you’re able to get your head above water briefly and fill your heart with something that takes you outside of the looming, intrusive, thoughts of cancer.

My situation can improve and below are glimmers of proof:

Things that were pretty awesome this week:

I spent that entire day in bed that day so when I received a text saying we got on the guest list for my favorite band that night it took a giant pep-talk to myself to get out of bed and do something I know would fill my heart with joy. Granted, it was general admission and I had to lug the 10lb TPN bag on my back but despite being really tired I made it through and was SO happy I went. There is something so uplifting about Andrew’s music and the fact that he crowd surfed on a giant inflatable rubber ducky.

Oh and how fitting, he played ‘Swim’ the song he wrote about his own cancer struggle that simultaneously empowers me and makes me cry every time. Hence Cory, Sheila and I huddled together in the bottom right photo. 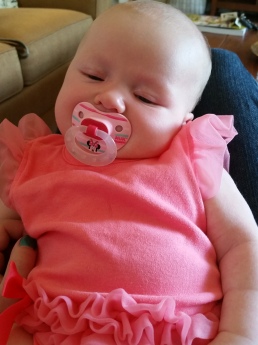 Auntie Jess got a visit from Katie and my little gummy bear. Hanging out with Katie is always the best but this is now amplified with squishy, sleepy, baby snuggles.

On a day I was feeling somewhat  okay (not clinging to the couch or porcelain throne at least) I ventured downtown to my new favorite happy place, Savoy Books. The store is two stories, floor to ceiling, of every genre imaginable. It has a small cafe and it’s warm, cozy, and just feels so welcoming. It’s a perfect place for when you’re not feeling well- quiet, air conditioned, and calm. 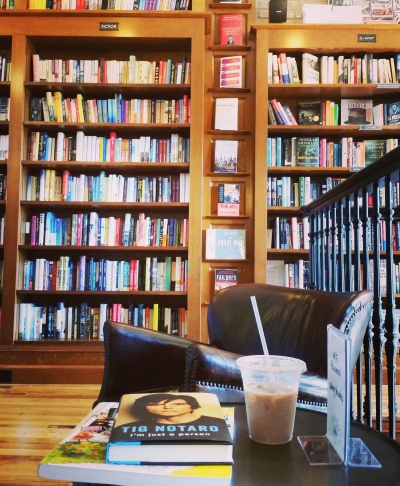 I took my time there and read about 45 pages of the book I ultimately purchased: I’m just a person by Tig Notaro. Tig is a well known comedian and really gained notoriety when she got on stage for a set and announced in her opening line that she had cancer (mere days of learning of her diagnosis). The recording of that set went on to be grammy nominated.

I feel like Tig and I are living semi parallel lives (in some respects). She was plagued by a serious bacterial infection that almost killed her, diagnosed with cancer, and faced horribly tragedy all in the same year (2012). Sometimes I read her words and think, SHIT did I write that? Get out of my head Tig!

Here is a perfect depiction of the struggle of re-training your body to eat: 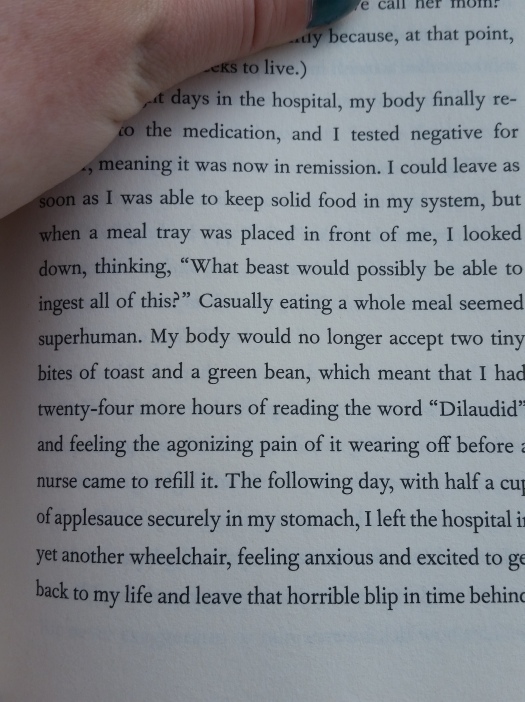 Spot on Tig, spot on.

I don’t have a picture but last night after an exhausting day Cory and I set up lawn chairs in our garage and decompressed while watching the pink lightning ignite the sky and take in the sounds of the rain and booming thunder as it neared closer. There is something oddly comforting to me about a thunderstorm so it was the perfect way to end our shit-sandwich of a day.

So that’s all for now. Updates will surely come and I hope that future posts will include more “I’m feeling good”, “I’m eating”, kind of stuff. For now, this is reality.

12 thoughts on “Ups & downs of an antibiotic overkill”