I have a lot to report on so you should probably grab a snack and a cocktail and get comfy.

So far 2016 has brought some great energy and experiences. I could probably ramble on for a few thousand words but you have lives to get back to so I’ll try to condense as much as possible.

Quick Thanks to Choose Hope Inc. for seeing Emily Nason sport their headband at the NOCC walk and reaching out to her. As a result of that they sent me a TON of merch and a beautiful handwritten card for encouragement. They are fantastic champions for cancer research and support so please check them out.

Prior to departing for La República Dominicana, I received the BEST news that my CT scan was stable and one of the pelvic tumors had even reduced in size. It was like getting an elementary school report card with comments like “Your tumors have been very well behaved and much improved! Plays well with others.”

When I returned from vacation I had a routine check up with Dr. Robison. Much to my surprise she wanted to talk to me about next steps and potential treatment modification for the near future. So here is one possibility to consider:

-May-ish would mark the one year point of being on this treatment plan. She is going to scan me again around that time. If the scan is still stable (unchanged) or tumors are shrinking she is willing to let me make the decision to opt out of Taxol (the chemo part) and just do Avastin (the antibody) once every 3 weeks. That is an AMAZING prospect!

She is leaving this in my hands. We know Taxol works so if it would make me feel more secure to stay on it, that’s fine. From a quality of life perspective I’d be interested in testing the waters with just Avastin. If I become symptomatic again we can just throw me back on Taxol, no problem. She assured me that it would not impact Taxol’s ability to still work if I go off and on again if we needed to. Sounds pretty good to me! The next few months will be critical.

After this past scan I wasn’t even going to bother to ask about my CA-125 because I figured it would still be high. Sheila texted me today to let me know it went down from 785 to 723. What a pleasant surprise 🙂

¡Ay dios mío! We had a REAL vacation! Cory and I spent the last week in Puerto Plata, Dominican Republic and it was 1000x better than I even imagined.

We initially hit a few snags. We had a flight from Providence to Newark that was delayed by several hours due to a mechanical issue. For that reason, we missed our connection in Newark to Puerto Plata and could not leave until the next day. After a lot of fighting with United Airlines (that had the most atrocious customer service) they begrudgingly sent us to Newark that day and put us up in the airport Ramada for the night with a couple food vouchers.

Thank GOODNESS I was with Cory who totally kept his cool because I was so frustrated with United I flew into a blind rage and had to walk away. To be clear, I have the true inability to “pop off” on others, especially people in service positions so “blind rage” translates to me hysterically crying and trying to pull it together crouched behind an ATM.

It wasn’t so much the disappointment about losing a day, it was truly the rude way in which we were spoken to and lack of problem solving on the part of United that drove me over the edge. The first woman we spoke to had an attiude that translated to “Well, not our fault. Go home.” Additionally, when I’m at the airport talking to United I should not have to CALL A CUSTOMER SERVICE NUMBER to resolve a problem only to be told that we shouldn’t be calling and need to talk to the ticket counter.

On the flip side, Expedia’s customer service was unparalleled. I called while Cool-Calm-Collected-Cory dealt with United.

Expedia was totally apologetic and didn’t put the burden back on us. They not only called the resort for us but they also refunded us for the night we missed. They were unable to re-schedule our shuttle from the Puerto Plata airport to the resort so instead they gave us a $50 credit which was more then the value of the shuttle. After this experience I would 100% use Expedia again. Here’s to you Expedia-

In a nutshell once we got there, the vacation was great. Our resort was small and had a nice community feel. We even made friends with a few of the other couples there. So I should thank Gabby, Alan, Nicole, Paul, Brian, Jen, Rob and Rachel for enhancing an already great experience (and being the best cheer section- explanation to come). 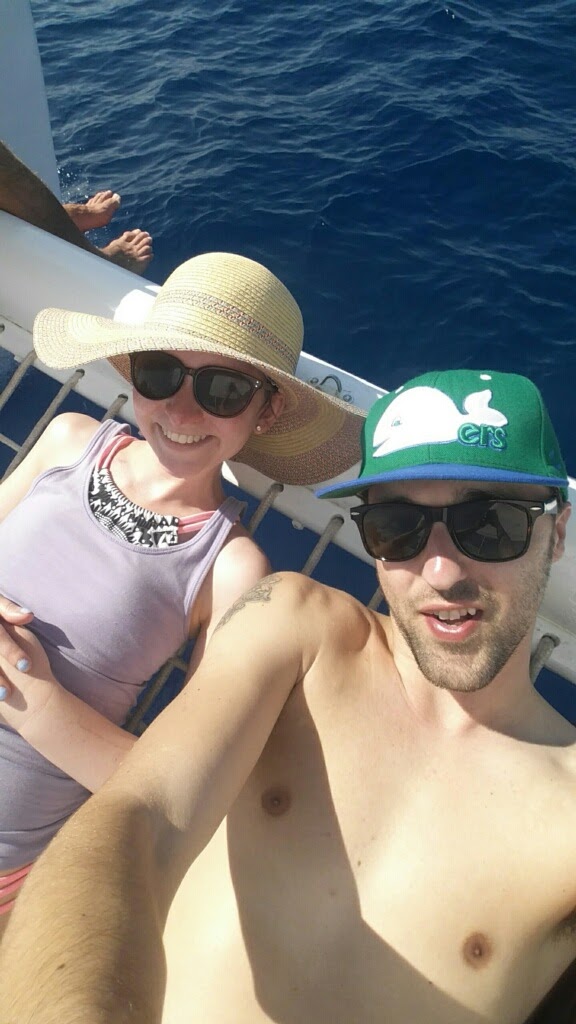 Yes, photos exist. Will I be posting them? Jury is still out on that one.

…and our not so secret handshake

Cory has at least 700 pictures/videos to sort through so unfortunately I don’t have many more to post right now but hopefully this will give you a little taste of the paradise we were so fortunate to experience over the past week.

I’m oozing with gratitude to be in a position to have this experience. I feel that my batteries are totally recharged, I am relaxed, and I am ready to take on the next few months.

I’ll keep this short and sweet since it is 5am, I’m at the airport, and I’m drafting this on my phone rather than writing, editing, deleting, searching for JUST the right fit and finally posting 2 hours later.

First I want to start by saying that do date 2016 has been phenomenal. Sure it has only been 13 days but I’ll take all the good I can get here.

So far I had an incredible birthday with my loved ones, and did a 3 hour yoga workshop with DDP himself. Yup for all my fellow 90’s wrestling fans, I got to meet Diamond Dallas Page.

And now I’m at the airport waiting to board a plane that will take Cory and I to the Dominican Republic.
It still doesn’t feel real. I’m half expecting the plane to land outside of Bryant to drop me off at work.

What better timing than this week to go on a tropical vacation because we got some good news on Friday that must be celebrated!

My CT scan results served to support that my increasing CA125 levels were due to infection and inflammation in the body.

The scan showed NO new disease 👍
NO growth of existing tumors 👍
In fact, one of the tumors in my pelvis is decreased in size! 👍👍👍

I couldn’t be happier. Many a piña colada will be had.

As of yesterday I am officially 28 years of age and it feels…pretty good, actually.

Some people hate their birthdays. Understandably comparing carefree youth with bills and perpetual acid reflux would sour anyone on getting older. Being that I am only 28, I am not a wise old owl in the position to tell anyone how to feel about birthdays but I am happy to share with you how I have come to regard my own.

From the age of 24 my body has been forced to share space with cancer- an asshole roommate that doesn’t pay rent and ignores eviction notices. I’m not one for focusing on survival rates and cancer stats because they’re not conducive to a positive frame of mind. Let’s just say, the stats are not typically in the favor of women with late stage ovarian cancer. That said, every birthday after 24 is more important than the last. Each passing January 4th is a trophy. It is a symbol that cancer isn’t winning.

On Sunday my parents passed through Providence for birthday lunch at Red Stripe. Anyone that knows Providence well can appreciate that a chilly-day calls for Red Stripe tomato soup and grilled cheese (with pesto, pear, and prosciutto…nom nom nom). They also kindly treated me with gorgeous flowers and a fruit tart. It was a really nice time to catch up with one another. Who better to kick off your birthday with than the folks that were there since the beginning- you know, that day when the stork dropped me off at their doorstep.

I was so touched by all of the phone calls, text messages, emails and facebook well-wishes yesterday! I am a very lucky girl to know so many thoughtful people.

Reading all of the kind birthday messages left me feeling like Ron Swanson on Snake Juice. THANK YOUUUUU!!!